Mothertongue was born in the midst of the feminist ferment that was sweeping the country and especially alive in the Bay Area in the mid 1970s. Many of the colleges in the area were hotbeds of feminism, and women flocked to classes taught by feminists and lesbians who were mini celebrities in the community. Women who were teachers, academics, students and community members contributed their ideas and energy to all sorts of new undertakings. In this exciting milieu Mothertongue was born. 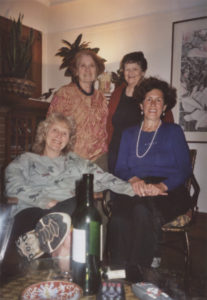 Many different women contributed to the birth of Mothertongue. In 1976 Lani Silver, an instructor at SF State, created the San Francisco Women’s Speaking Bureau, with volunteers going to schools and organizations to talk about their experiences as women. Gradually women began to realize it was easier and more effective to read our stories than to speak extemporaneously. This gave birth to Breast and Roses Reader’s Theatre named after their first script, Breast and Roses. Original members included Batya Podos, Jeanne Marlow, Robin Song and Gwen DeJong. The first performances were in November, 1976 at Full Moon Café in San Francisco and Everywoman Coffeehouse in Menlo Park.

In 1976 Sally Gearhart, another instructor at SF State and one of the most visible and beloved lesbian feminist activists in the Bay Area, proposed an event that would look at the ways violence impacted women. She approached Roma Guy of San Francisco Women’s Centers and Women’s Centers became the main organizers for the Conference on Violence Against Women which was held in early December, 1976. Sally, Lani and Corky Wick worked with SF Women’s Centers on the event.

Click on the images to view them full size.

Of course the new group needed a name and we struggled collectively to find the right one. Then Wendy Moser read a poem she had written on the topic of mothers and daughters. It ended with the words “this script slips into mothertongue, mothertongue, mothertongue”. Immediately we all knew what our name was: we would be known as Mothertongue Readers Theater.

Our focus widened from violence to a variety of feminist issues. The first scripts were Women and Anger, Loving Women, Women and Work, Mothers and Daughters, Women and Rape and Sex Roles. Scripts

The collective grew quickly, with more than fifty members performing in up to six different scripts a month. In those early years, unlike today, we had many different kinds of places to perform in. There were women’s bookstores, restaurants and cafes, and lesbian bars in many cities as well as women’s centers at colleges and universities. To name a few in the Bay Area:  Mama Bear’s (a women’s bookstore and café in Oakland), The Bacchanal (a lesbian bar in Albany), Artemis Café (a women’s restaurant in San Francisco) and Old Wives Tales (a women’s bookstore in San Francisco). We performed at conferences, music festivals, political events, and benefits of all kinds. Performances

We had no scenery, no props. We were light on our feet and ready to go wherever we were needed. We would line up our five or six stools and read our pieces in the order we’d worked out, after which we would introduce ourselves, thank the contributors to the script and then invite the audience to share their own stories. This was an essential part of the show!

Later, to proclaim pride in the feminist collective process that has been an organizing principle from the beginning to the present, we changed our name to Mothertongue Feminist Theater Collective.

Early in our history we became a sponsored project of the non-profit Women’s Centers of the San Francisco Bay Area, making the Women’s Building our home base. The collective was chosen as a member of the former People’s Theater Collective and was a member of Theater Bay Area. We have allied with dozens of women’s, lesbian and progressive political groups and have performed in small and large venues at many benefits, conferences, music festivals, community and political events. Benefits and Events

Click on the images to view them full size.

In 1993, in response to the many times we had been asked, “Can you show us how to do Mothertongue?” we decided to create a formal document, a handbook. The handbook covers the why and how of feminist readers theater, including collective and creative process, visions and much more. It includes some of the materials we have developed over the years, some of our imagination, and a lot of hard work by the many members involved. It is available to view and download here:

It’s been more than forty years since we burst on the scene. Our membership is small now and we have aged of course, yet we are still writing, still performing, still an open collective (new members welcome!) and still full of the juice we had in 1976 when we first knew we had lots to say and that readers theater was the way to say it.

The Mothertongue archives, including past scripts, are housed in the GLBT Historical Society Archives, open by appointment, at 989 Market Street, San Francisco CA 94103